It may have taken over 12 months for Molly Bourke to get her first ride, after the Covid-19 pandemic slowed down the jockey training process, but it has only taken the Wagga-based apprentice six starts to register her first victory in the saddle.

The Tumbarumba product rode her first winner at her home away from home when guiding Mouse Almighty to victory in the 1000m Benchmark 58 Handicap at Murrumbidgee Turf Club for master, George Dimitropoulos.

Bourke explained her first win was made all the more special because it was on board her favourite little mare.

“It was awesome, there was nothing better than that, crossing over that line, and I was so happy it was on that horse,” Bourke said.

“I’ve done everything with her, right from my first trial and jump out – it was a special moment.”

Bourke, who had previously been limited to riding at non-TAB meetings while she honed her craft, was able to win at her very first TAB meeting and she was happy to earn her first victory for her boss.

“After my first rides at Leeton I was only beaten half a length on Mouse Almighty, but I was a bit disappointed because there were no non-TAB meetings around and the stewards had asked me to stick at non-TABs for a bit,” Bourke said.

“Then to win at a Tab meeting, my first ever TAB meeting, and to do it for George (Dimitropoulos), that’s pretty awesome.”

The 18-year-old said her first win was a blessing in disguise, after last Saturday’s meeting at Young was abandoned, meaning she was given the approval to step up to TAB 2 racing.

“When Young was cancelled, the stewards said there were no non-TAB’s around and that I could go to TAB, and I’m glad I did,” Bourke laughed.

“In a way, we were a bit disappointed that Young couldn’t race, but it was a blessing in disguise because that allowed me to ride at the TAB and get my first winner.”

Bourke wasn’t getting ahead of herself or thinking about future meetings, instead choosing to focus her attention on riding and getting the little things right.

“I don’t know when I’ll ride next. I’ve still got to stick to TAB twos for now, and I’m still not allowed to go to full TAB, but I just need to keep working,” Bourke said.

“I will just work away, and the odd race meeting will come up.” 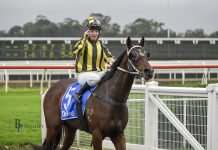 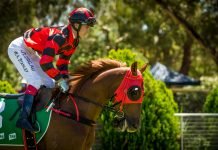